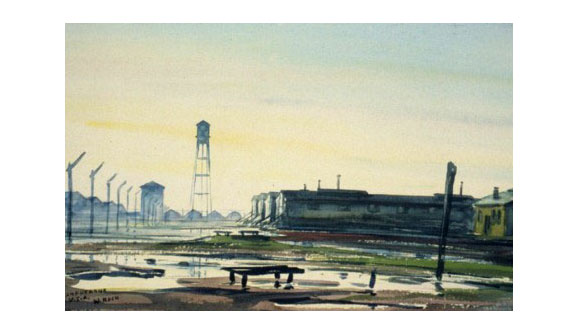 I was quite please to hear from a former US Army officer, Milton Duchan, who was stationed at Camp Hearne for two and one half years.  His cousin had sent him a copy of the Dallas Morning News – Texas Living article recently that reported the Camp Hearne story.

A time was set and I called him back to discuss his stay at Camp Hearne. When asked his initial reaction to the POW Camp he had been assigned he said there was nothing to do in the beginning.  He arrived when the Camp opened in January 1943, but the prisoners did not arrive until later that Spring.  He simply reported to roll call each morning and then spent time exploring the area.  Hearne, to this Detroit Michigan native, was a “small western town with covers over their sidewalks”.  He liked visiting the town folks in various stores and establishments.  Although small, he was pleased to find out that Hearne had a Club House and swimming pool.  He remembers the Aztec and City Cafes and especially the barber, Casey Moore.  He said a visit to the barber was more than a haircut, but a truly entertaining experience.  “Casey was a great storyteller.”

He visited Bryan a lot. One trip he remembers very vividly.He had made the acquaintance of a local merchant from a Department store by the name of Charlie. He told Duchan that he needed to check on a vehicle in a mechanic’s shop in Bryan and asked if he would like to go along for the ride. He agreed and while there, he saw a car he tried to buy. The mechanic wanted $200, but Duchan offered a $10 deposit until his wife could wire the remainder. The mechanic said it would go to whoever had the $200. When Charlie heard the requirement, he “pulled out a roll of money like I had never seen and paid the man $200 so I could have the car.” Duchan asked Charlie why he would do such a thing for a virtual stranger. Charlie replied, “You look like a trustworthy guy.”

This gesture of hospitality impressed Duchan greatly.  He said that they (the military stationed at the Camp) were welcomed and the townspeople were “quite open and friendly” to the troops.

Duchan had graduated from college when he was drafted in to the Army in August 1941, just 4 months before Pearl Harbor.  He spent his basic training in Fargo, N.D. before going to California as an enlisted man.  He had applied for officer’s training when orders came for him to depart from Sacramento to parts unknown.  He remembers a car pulling up at the dock and a man calling out a list of names.  He was on the list and had to report to Presidio instead of being shipped out.

When he was accepted to officers training, he was sent to a school referred to as “BI” training. This was “business immaterial” which basically trained officers to handle the “foreseen red tape” necessary to run the Army. The idea was that it did not really matter what unit the officer would be assigned; that is, military police, combat, infantry, motor pool, etc., this officer would be able to navigate through and perpetuate the necessary reports and assurances to keep the unit going.

Duchan was finally assigned to Camp Hearne where he reports that it was the best job he could have had in the Army.  His days were routine unless there had been an escape that restricted them to the base.  The only memorable events were the suicide of one of their fellow officers who seemed to be a very melancholy young man from the beginning.  The murder of Hugo Krauss was also unfortunate. Duchan had teased Krauss, a German prisoner with strong American ties, that “he spoke German with a Brooklyn accent”.  Krauss was beaten to death by Nazi hardliners in the Camp who saw him as a “traitor”.

As an Administrative Officer, Duchan did not fraternize with the prisoners or their US guards. When asked of his impressions about the Germans, he said they were arrogant. He said, “they had been told that New York had been bombed and that the Army was only treating them so well because they [the US Army] wanted to be treated well when the Germans landed.” The POW’s finally recognized that they were the prisoners and the war was not going in their favor.

Duchan saw the care in which the German prisoners were treated as an important role for the Army. “The idea was that we would treat them as best we could and, in turn, they would treat our US soldiers that were taken prisoners as best they could.”  Even those required to work seemed happy to escape their stockade for a day in the fields.

For the most part, Milton Duchan spent 2-1/2 years unremarkable years stationed at Camp Hearne.  The days were routine.  The social gatherings were mostly dictated by rank with some intermingling with the US Army Air Corps personnel from the Bryan base.  His wife had joined him and they lived in town on First Street in a duplex.  They had a son who was born in Bryan.

When asked what he remembers most about his experience, he quickly says “the people of Hearne were friendly, affectionate, generous… just very special people.  They made us feel at home and welcome.”

Basically, Milton Duchan experienced 63 years ago something that is still our most tangible asset.  “Hearne was [and still is] one hella of nice town”.