How does a farm boy from Kosse, Texas, find himself knee-deep in snow in the Italian Alps, taking out German outposts dotting winding mountain roads? He becomes part of the 88th Infantry Division with the assignment to clear the Germans out of Italy. That is exactly what happened to Mr. Adrian Cordova, but that is also why Cordova had four memorable days in Rome. “I had bad times and I had good times,” said Cordova.

The 88th Infantry Division, or, as Nazi radio commentator Berlin Sally dubbed it, the “Blue Devils,” was re-commissioned in July 1942, and assigned to Ft. Gruber near Muskogee, Oklahoma. When Cordova was drafted in January 1943, he was initially part of the 86th Division but after basic training at Camp Howze near Greenville, Texas, he was reassigned to the 88th, 350th Regiment, Company B and thus part of a division whose commanders were determined to make the best of their time in the US military.

In an address to his troops, Commanding General Sloan said, “We’re going not only to Rome and Berlin, but all the way around to Tokyo. We will fight our way around the world and prove the 88th is the best division in the entire Army. This coming year of 1944 will see new history made – we are lucky to be in the making.” Though Sloan’s prediction did not come true entirely, the 88th did distinguish itself as one of the best in the military and Hearne’s own Adrian Cordova helped make the Division’s “history.”

After maneuvers in western Louisiana and East Texas from late June to early August, the 88th was assigned to Ft. Sam Houston as a reward for its “stand out” performance. In the fall, the 88th was sent to the east coast to deploy to North Africa and then to Italy. In 21 miserable days at sea, the troops had to stay mostly below deck on short rations and many were seasick most of the way across. Cordova developed his sea legs immediately and was not sick at all. For him, the trip was not so bad.

In October, Cordova was in Oran, North Africa, engaged in something a flatland farmer had probably never dreamed of –mountain training. The US military was planning to take Rome by striking through the mountains, a plan that no other invading army had ever been able to accomplish in Rome’s long history.

The 88th reformed in Naples, Italy, in February 1944 and staged in the Piedmont d’Alife area. Then they waited for the action to start. The wait was not quite as bad for Cordova because he could speak Spanish and his Spanish enabled him to speak to the locals – Italian and Spanish speakers can usually understand each other fairly well. But mostly, the 88th was impatiently waiting – waiting for the push for Rome. Elements of the 88th would be briefly deployed to relieve other divisions, but they saw very little action until May.

In May, the push through the mountains and into Rome began. The Americans faced strong opposition on May 11 as they broke through the German Gustav line. They fought so fiercely, the Germans said those devils with the blue cloverleaf insignia were “blood-thirsty” cutthroats.

The 350th was ordered over a mountain near Rome in June 1944, and “we went over it.” They were ordered to “dig in” but they could not. It was all rock. So Cordova and his buddy constructed a little rock enclosure a few feet high all the way around. It did not work. The next morning, Cordova was hit with an 88 round that left a chunk of metal the size of a fist in his leg. Cordova kept on advancing for about eight more hours, some of the time through a mine field, until he ran into a Red Cross Station. They told him it was time for him to go the rear.

Cordova spent a month in the hospital and then another month recuperating before he was sent back to the front. “I was thinking I was going to go home but I didn’t. They returned me to my company and two or three weeks later, I became the squad leader.” Some of the Division’s heaviest fighting was yet to come.

In August, the 350th was sent to assist in Livorno operations northwest of Rome and south of Pisa. It crossed the Arno River and continued advancing until it was relieved on September 6.

After a little time off, Sgt. Cordova and the 350th was back into action from the third week in September and throughout October. The regiment advanced rapidly along the Santerno River Valley toward Imola. They used their mountain training on Monte Acuto and seized Monte Pratolungo and Monte del Puntale where they met strong German resistance. The Battle for Monte Battaglia, fought from September 27 through October 13, was extremely bloody, as was the Battle of Monte delle Tombe.

The 350th took Monte Grande on October 20 but the offensive was halted on October 26 after over a month of hard mountain fighting. The Division dug in to defend the territory it had fought so hard to claim. In January, the Division was relieved for rehabilitation and Cordova rehabbed in Rome. And the good times rolled.

The division started attacking again in April 1945. They took Monte Mario on April 18. They reached the Po River valley later in the month and Verona and then Vicenza. “We had them on the run,” said Cordova. When the German forces in Italy surrendered on May, the Blue Devils were advancing through the Dolomite Alps, heading for Innsbruck, Austria.

Cordova remembers a time on the long trip to Austria when Company B “liberated” a German warehouse full of bicycles. In his entire life, Cordova had never ridden a bicycle. “We all got one and I rode it.” He grabbed on to a truck and was having a great time, but “then we hit an enemy outpost. We all dropped our bikes and ran.”

Throughout those long days before the German surrender, Cordova and his squad would hitch rides on the tanks, then drop off to clear out Nazi “nests” along the sides of the steep mountain roads. When the mountain fighting was over, they fully expected to finish the war in Japan.

“We were supposed to spend 20 days at home and then go back,” said Cordova. To get back home, they returned to Casablanca, boarded a ship to Brazil and then sailed up the coast to the United States. He was safely back in Texas when the atomic bomb was dropped and the Japanese surrendered.

Cordova spent a little time in Fort Worth and San Antonio before being discharged. “I was glad to come home alive,” he said. He moved to Calvert in 1947, married a Robertson County lady and came to Hearne to work on cars. When he had the opportunity to buy the cleaners his wife worked in, he seized the moment and the rest is Cordova Cleaners history.

Whenever you hear a story like Mr. Cordova’s, you’ve got to wonder what kind of “medal” it took to advance through a mine field with a fist-size piece of metal in the leg. Those young men coming out of the Depression were tough – they weren’t complainers. Those Bloodthirsty Blue Devils were certainly more than the Germans had bargained for. 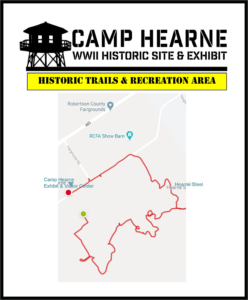